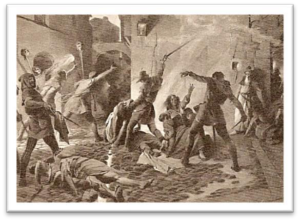 Due to the Pogroms of 1391 and the Decree of expulsion of the Catholic Monarchs in 1492, a long pilgrimage begins for many Jewish families who had to leave the villages where they had lived for many generations and considered their home. Likewise, if they did not want to be expelled they could convert to the Christian religion. Many left, especially of the wealthiest families, but they were also baptized and remained many.

This story tells of those who left, the cities and host countries, how they lived and what they contributed. They settled throughout the Mediterranean, Central Europe and North Africa: Rome, Thessalonica, Istanbul, Jerusalem, Alexandria, Vienna and Kraków are the main cities that welcomed them, among many others. But always preserving with nostalgia the memory of his lost homeland, of his language and of his customs.

It also speaks of the many who converted and did not leave, and it talks about how they continued to live and how, a vast majority, continued to profess their faith secretly, faithful to the God of their ancestors. It also speaks of the brutal repression exerted by the terrifying machine of the Holy Inquisition against those who were discovered. There were but, those who in spite of everything, succeeded in leading this double life for centuries, such as the xuetes of Mallorca, which are a living example of the passive resistance of a community faithful to its moral and religious principles, which has lasted until our days.

And finally, we arrived at the reunion of the descendants of the Jewish people exiled with the current Catalan people, at the beginning of the 20th century with the return of some families mainly from Istanbul. From their relationship and mutual help to the devastating events of the Spanish Civil War and World War II: and the escape routes through the Pyrenees to the United States.

Land of Edom is a story of pain and forgetfulness, but at the time of stubbornness and perseverance. But it is also the story of a new coexistence and a reunion to this day.